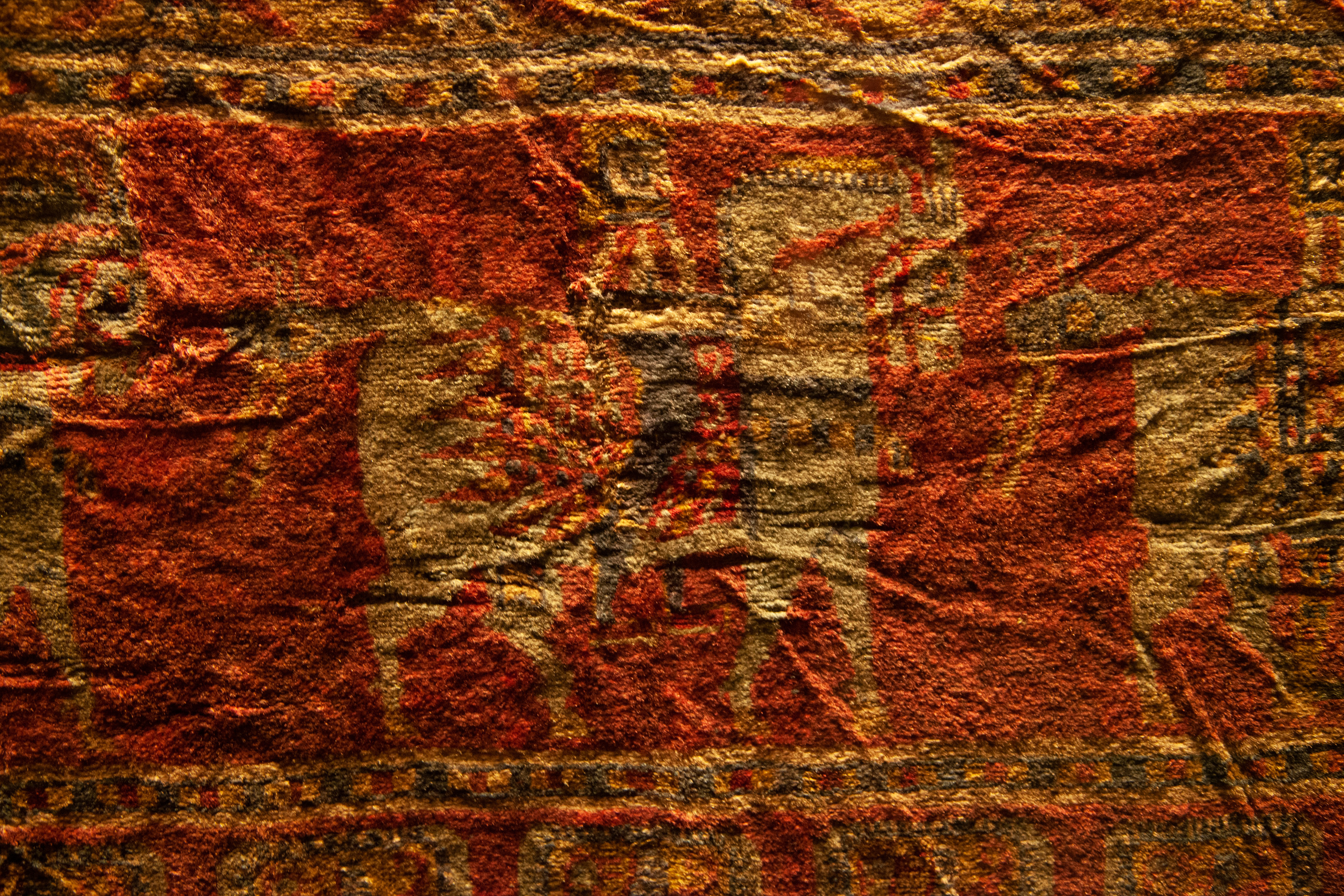 Carpets have a long history dating back to ancient civilizations. Carpets have been used for a variety of purposes throughout history, including floor covering, insulation, and decoration. They have also been used in religious and ceremonial contexts for both practical and decorative purposes. Some carpets are weaved and used by nomads/villagers and others are weaved in workshops for courtyards, palaces, or mosques, which have different purposes and symbolism.

In many cultures, carpets have also been used to convey symbolic meaning, with specific designs and patterns used to represent different ideas or beliefs. The earliest known carpet was discovered in the Pazyryk Valley and is believed to date back to the 4th century BC. The ancient Persians, Greeks, and Romans also had a rich tradition of carpet-making. In the Middle Ages, carpet-making flourished in the Islamic world, with famous centers of production in Persia, Turkey, and Egypt. Carpets were also made in Europe during this time but were not as highly developed as those in the Islamic world. During the Renaissance, European carpet-making began to flourish and by the 18th century, the industrial revolution led to the mass production of carpets.

The Pazyryk rug is one of the oldest carpets in the world, dating around the 4th–3rd centuries BC. It is now in the Hermitage Museum in St. Petersburg, Russia. The Pazyryk rug was found in 1949 in the grave of a Scythian nobleman in the Bolshoy Ulagan dry valley of the Altai Mountains in Kazakhstan. The Pazyryk rug had been frozen in the ice and was very well preserved. The rug has a ribbon pattern in the middle, and a border that has deer, and warriors riding on horses. All parts of the rug are made of wool, including the pile and the base.
Being produced either in Ancient Armenia, Persia, or Central Asia, this carpet has 3600 symmetrical double knots per dm² (232 per inch²), in modern terminology also called “Ghiordes knot (or “Turkish knot”). The design and recurring motifs of the Pazyryk Rug would later be found in similar Turkmen carpets, early Seljuq period carpets, and modern Turkish carpets and kilims.

The Pazyryk rug is probably the oldest surviving pile carpet in the world and the origin of the rug is still unknown but more than its origin, this rug shows us the symbolism of the carpets, a settled civilization with high skilled weaving techniques and mysterious history. 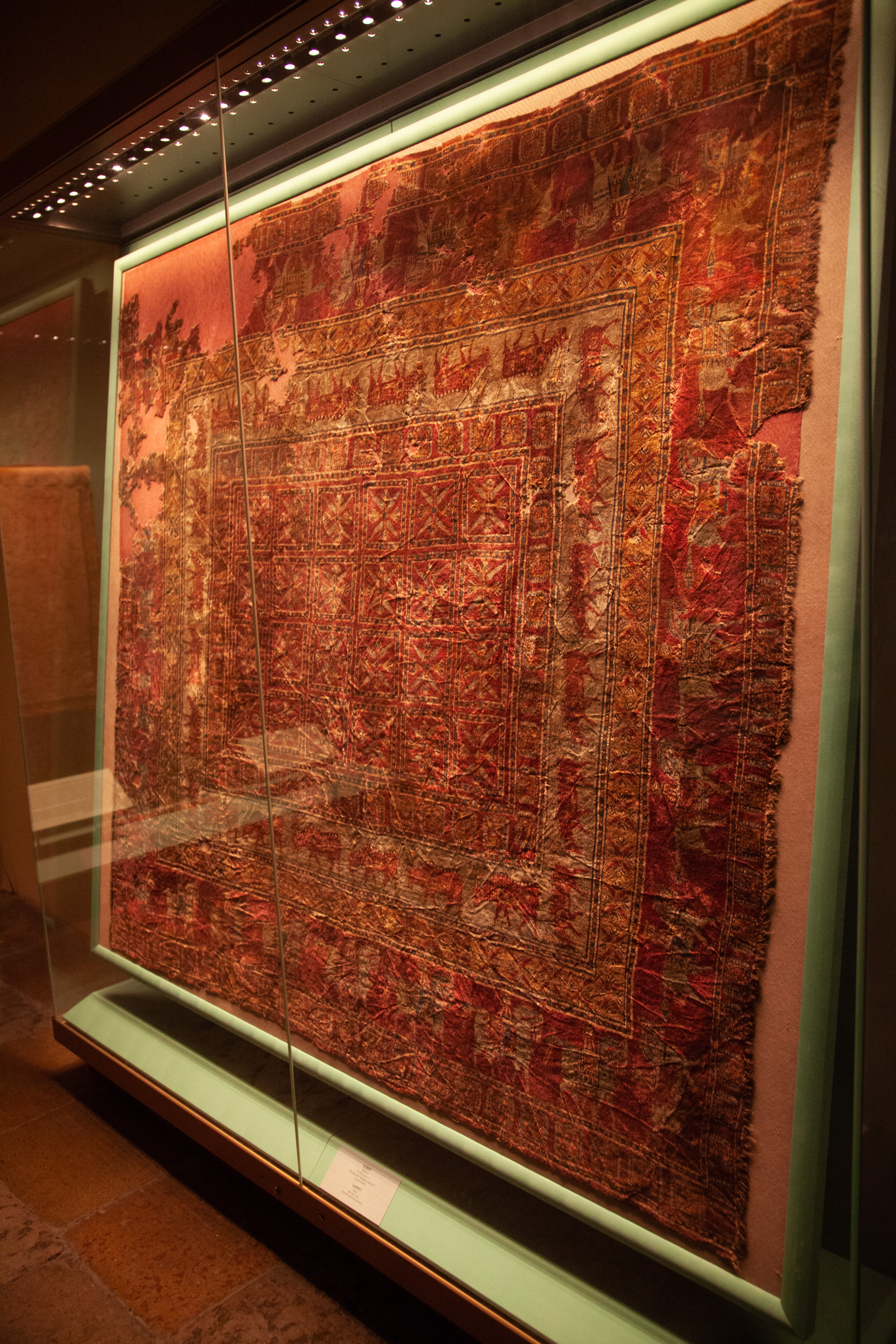 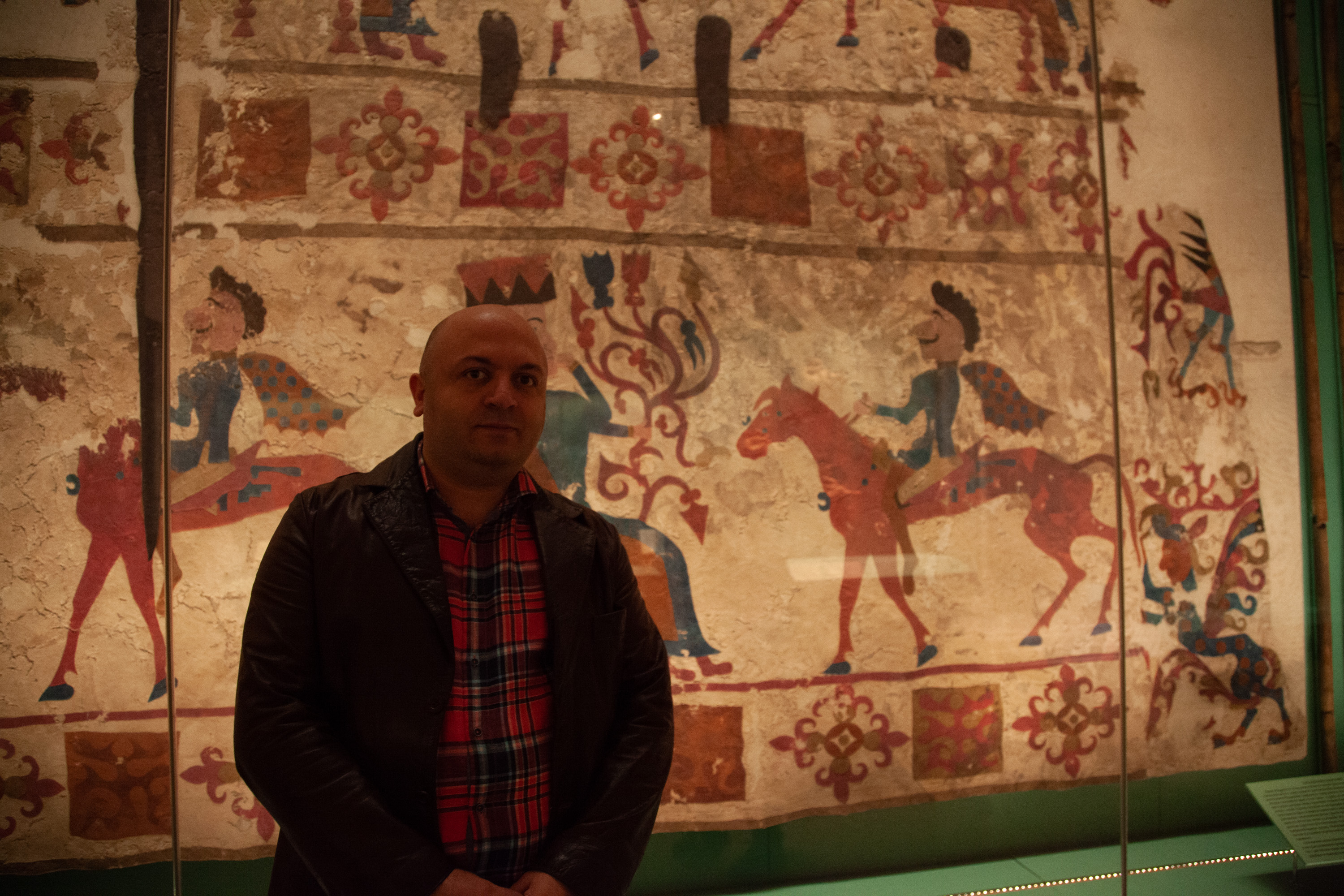 Carpets and rugs often have symbolic meanings in the cultures where they are made. In many traditional cultures, carpets and rugs were used to tell stories, convey religious or spiritual messages, and convey social and cultural values.
In Islamic cultures, carpets and rugs often feature geometric patterns and intricate designs that symbolize the unity and harmony of the Islamic faith, the infinite, and the unity of God. The use of geometric patterns and designs in Islamic carpets also reflects the belief in the mathematical and cosmic order of the universe. For example, in Islamic culture, carpets and rugs often feature geometric patterns and calligraphy, which can symbolize religious verses from the Quran or the names of Allah.
In the traditional nomadic cultures of Central Asia, carpets and rugs were often adorned with symbols and motifs that held specific meanings. Central Asian traditional carpet and rug designs often feature images of animals and plants, which can symbolize the natural environment in which they lived. For example, the “Tree of Life” symbol usually found on these rugs represents the connection between heaven and earth and the continuity of life. The “Evil Eye” motif is believed to protect the owner from bad luck and negative energy.
In Chinese culture, carpets and rugs symbolize wealth, power, and status. They were often adorned with auspicious symbols such as dragons and phoenixes, which were believed to bring good luck and prosperity.

In many cultures, the colors used in carpets and rugs also held symbolic meaning. For example, red symbolizes happiness and prosperity in Chinese culture, while blue is often associated with heaven and spiritual purity in Islamic culture.
Some common symbols found in carpet designs include geometric patterns, which can represent the universe or the natural world; floral patterns, which are often associated with fertility and growth; and animal figures, which may symbolize strength or protection. Additionally, certain colors or combinations of colors may also hold symbolic meaning, such as red representing life and energy, and blue symbolizing the heavens or the spiritual realm.
Overall, carpets and rugs are often rich in symbolism and meaning, reflecting the cultural and historical context in which they were made. The symbols used in carpet designs are deeply rooted in the cultural and historical context of the people who created them and can offer a glimpse into the beliefs and values of past societies. 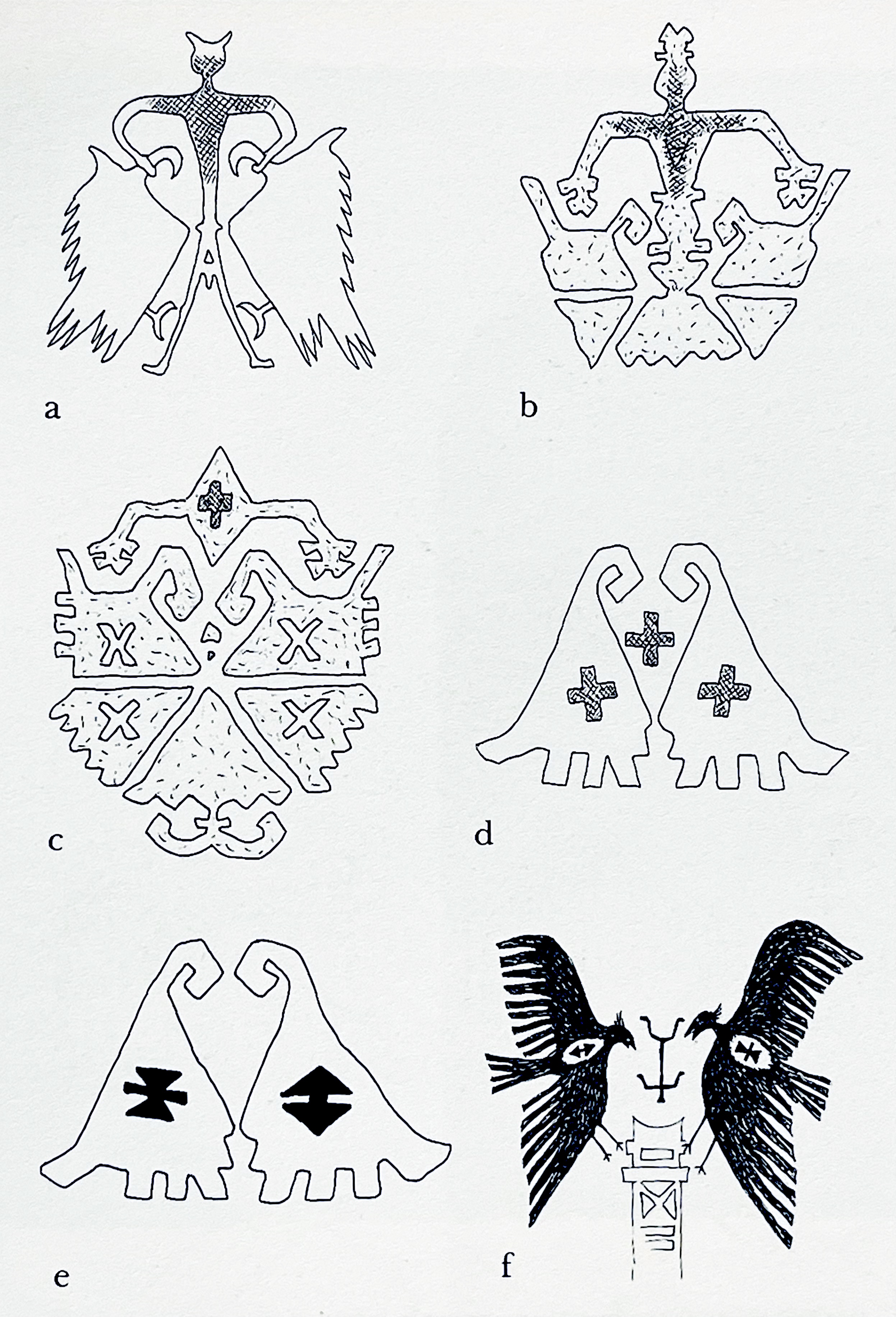 Welcome to Ararat Rugs, the beginning of truly great things! Bring your new architecture or interior designs together with our magnificent and unique rugs.

The design of ‘Dragon’ carpets consists of a f

That rug with the central star was designed in the

Have you seen the wonderful designs of William Morris?

A key figure in the Arts & Crafts Movement, Morris championed a principle of handmade production that didn't chime with the Victorian era's focus on industrial'progress.